What a wonderful Christmas surprise. Well, a couple of days before actually but I have only just got to putting finger to key now, which makes it post Christmas day but… ah well, I am babbling.  What I mean to say is that finally I have had a visitor from GREENLAND. Huzzah!!

Dani Henriksen from Nuuk dropped by to see my last post – Breakfast with Audrey.  Aluu Dani and Juullimi Ukiortaassamilu Pilluarit (thanks omniglot).  Dani is a Filipina whose blog can bee seen here. Maligayang pasko at manigong bagong taon (and apologies for my rusty Tagalog).

So now, the 2013 challenge begins – to have a person from Mongolia visit. So, brush off your penpals and if they live in Mongolia, get them to drop on by. Of course Ulan Bator is somewhat larger than Nuuk but, unlike Nuuk, I have actually been to the Mongolian capital.

When I was there in 1991 the world was a different place. The USSR was coming to an end, China was reluctantly allowing in foreigners and  a ticket on the trans-Mongolian could be purchased cheaper on the black market. Mongolia is definitely on my list of places to visit again.

Now, just because I like this pic, here is a lovely juvenile water dragon spotted near Montville in Queensland the other week. Have a wonderful journey into 2013 and remember, it’s only 981 more days until the revised Mayan end of the world. So, keep smiling. 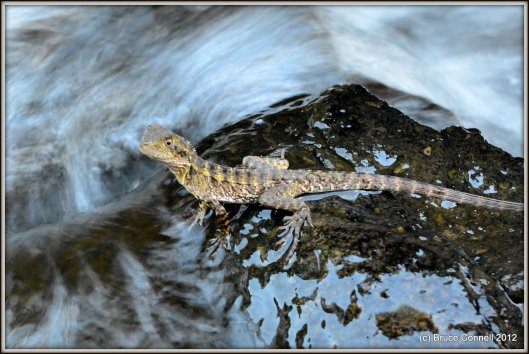 In 2009 I went for a walk around Brisbane taking photos of reflections. While crossing the river Victoria bridge I glanced across to the other side of the road and saw these wonderful tourists just passing. Of course, I didn’t have my camera ready so had to quickly snap what I could. The result is below.

Now, normally I don’t play too much with pictures as I am in the mood of trying to get the photo right at point of origin. That doesn’t always happen 🙂 This one I played with and kind of like the effect of the coloured umbrellas.

Which version do you like?  I wonder if the tourists ever went to Nuuk (ha – I bet you didn’t pick up the link between this and Greenland!).

Today’s photo comes from a day at the lake watching my daughter and her friends in the rowing regatta. Click here or on the photo above to see my Friday photo.

A friend of mine has started posting her favourite photo for the week.  I am now shamelessly stealing the idea and posting on of my own each Friday – well, that is the intent. I hope to show photo’s warts and all – no post-processing, no tweaking, just straight out of the camera. Feel free to post your own pics or make helpful suggestions as to how you think I could improve the image at the time it is being taken.

Crawley Edge Boatshed can be found by clicking here or by using the tabs at the top of this page.

PS: If you want to see my friends pics, she is over at Oppsiemumma.